Why I Tape my Garmin Watch during Races

You’ve probably heard me mention that I “tape my watch” during races, and judge my pace based off the feel of my legs. It’s something I’ve been doing for just over a year, and it’s worked wonders for not only my running, but also my mind.

Before each race, I literally put two strips of black electrical tape over the face of my Garmin watch so no part of the watch face is visible. 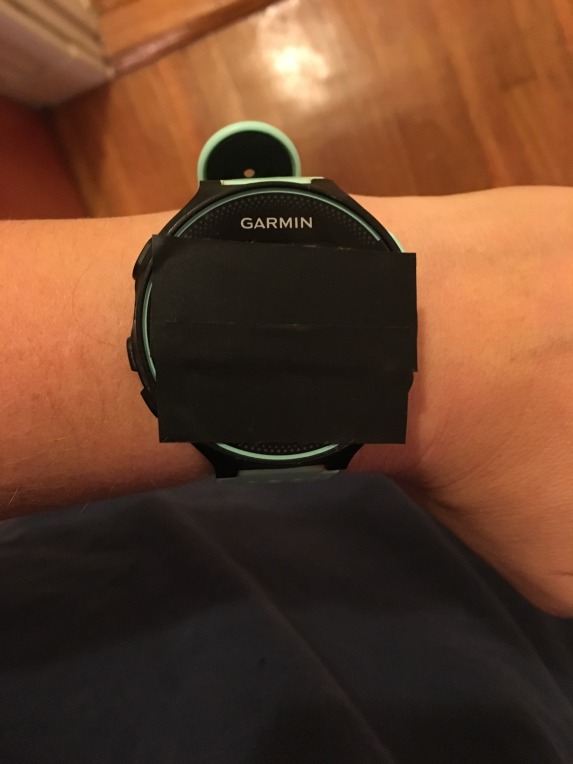 I started doing this in October 2016 because I found that I was staring at my watch too much during races. Constantly looking at my watch was distracting me from my race, and too much of my focus and attention were on numbers.

So in October 2016, I taped my watch and ran the Tufts 10k for Women in downtown Boston. I remember focusing 100% of my attention on my legs, and how I felt. I remember starting out conservatively, and clocking my sixth and last mile at a 7:39 pace, something back in 2016 I didn’t know I was capable of running.

I know I would not have run this well if I had been distracted by my watch.

I was so proud of myself, and knew this new trick was working well for me. Since I began taping my watch, I have been working so hard to learn how to judge my pace based off the feel of my legs. Since October 2016, I’ve been able to find a given pace all on my own, and stay with it, all without relying on my watch. It’s been freeing and I feel like it’s helped me grow tremendously as a runner.

Just a few weeks ago, I ran the Baystate Marathon and ran a consistent, steady paced race. My Garmin had tape on it, and the entire marathon was based off of the feel in my legs. It led me to a 3:44:28 marathon PR (8:30 average pace), with less than ten minutes to shave off until I run a qualifying time for the Boston Marathon. 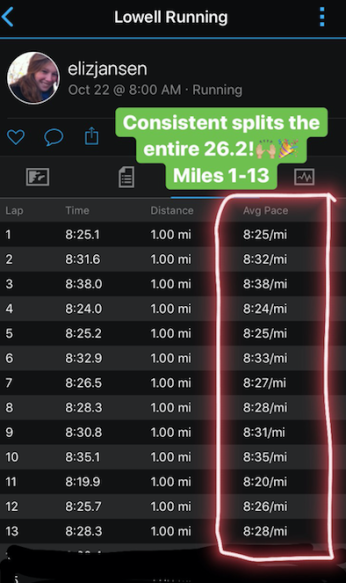 Every single mile was run by feel of my legs.

The only thing I use my Garmin for during a race is the vibration every mile. I count four vibrations (four miles) and then I know when to take a Gu gel (I take one every four miles). Other than that, I don’t rely on my watch for anything during a race. I press the “start” button as I cross the starting line and forget about it until I press the “stop” button after crossing the finish line.

After a race, I transfer the run to my Garmin app and look through all my stats. It’s interesting to compare my actual pace to what I felt I was running. It’s also helped me a lot with increasing cadence and lowering my heart rate.

This trick has worked so well for me and my mental strength. I will continue doing this during races, and I’m so excited to see where it will take me!

Welcome to Elizabeth Healthy Life! I’m Elizabeth, a PreK teacher and certified running coach living in Boston and running marathons in memory of my older brother, Robert. My blog documents my journey to a healthier life, while sharing the struggles and successes I’ve faced throughout my journey and much, much more! .